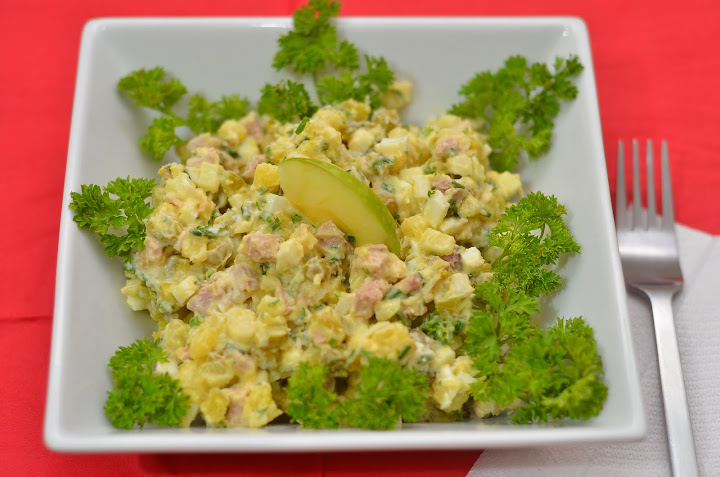 This salad is made up of diced vegetables,meats, and mayonnaise. In the west, this salad is called “Russian salad“. The original version of the salad was invented in the 1880s by Lucien Olivier, a chef of one of the most famous restaurants in Moscow at that time called the “Hermitage.” This salad quickly became extremely popular among the regulars and it became the restaurant’s signiture dish. The exact recipe- the sauce in particular- was a kept as a guarded secret, we do know though that the original recipe had veal tongue, caviar, lettuce, crawfish, capers, smoked duck, although it is possible that the recipe changed during different seasons. The original recipe included a mayonnaise that Oliver made using French wine vinegar, mustard and olive oil but the exact recipe remains a mystery.
At the turn of the 20th century, one of Olivier’s assistant chef tried to steal the recipe. While preparing the sauce one night, alone, as usual, Olivier was suddenly called away because of an urgent situation. Taking this opportunity, Ivanov snuck into the private kitchen and was able to figure out the ingredients to the secret recipe. After some time, Ivanov left the “Hermitage” and was hired to work as a chef in a restaurant “Moscow”, which was slightly less famous then the “Hermitage” at the time. Ivanov served the suspiciously similar salad and named it the “Capital”, it is said though that the original was much better then it’s imitation. Later, Ivanov sold the recipe to various publishers making it even more popular. In 1905 the Hermitage closed and many families left Russia, Oliver’s salad became known as the “Oliver”. The salad remains popular but has had many changes to the recipe throughout time. In this particular recipe I have moved away from the original  and made it my own. 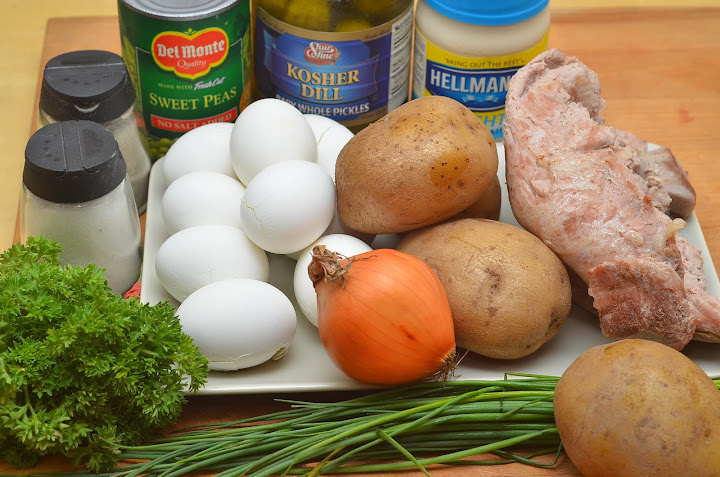 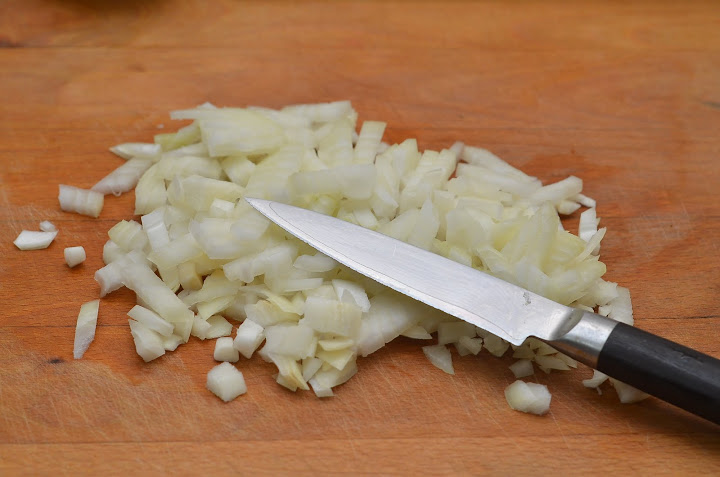 2. Cover onions with boiling water and set aside for 5 minutes. This will get rid of the bitter flavour and will make the onion soft. 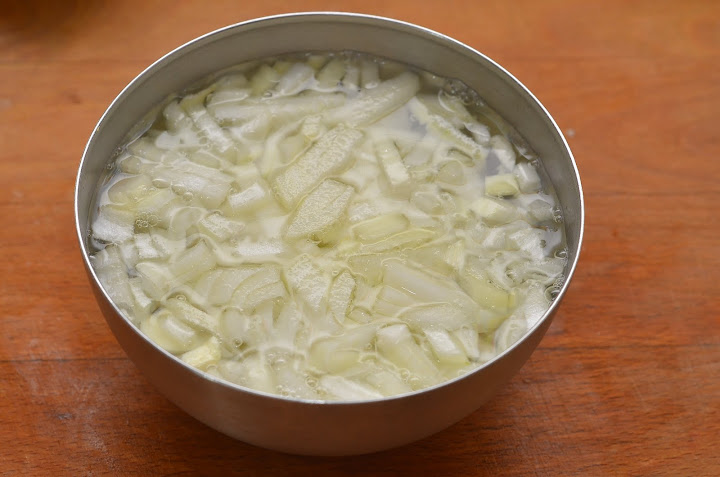 3. Cut the meat into cubes, traditionally the recipe uses sausage but I like it using only pork fillet, just as my mother taught me to make it. 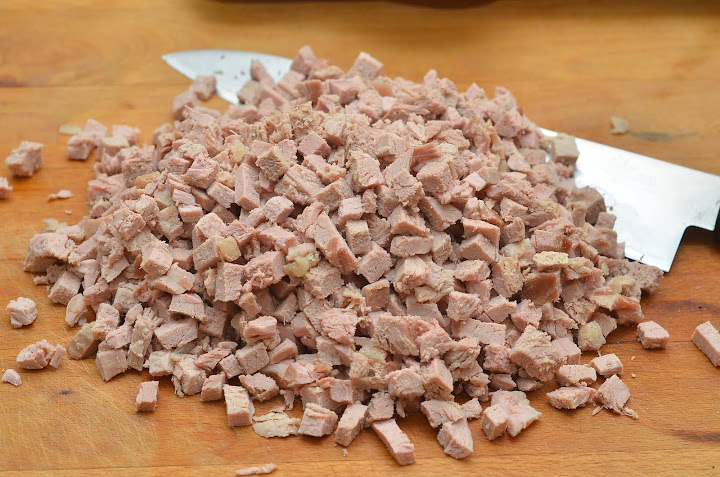 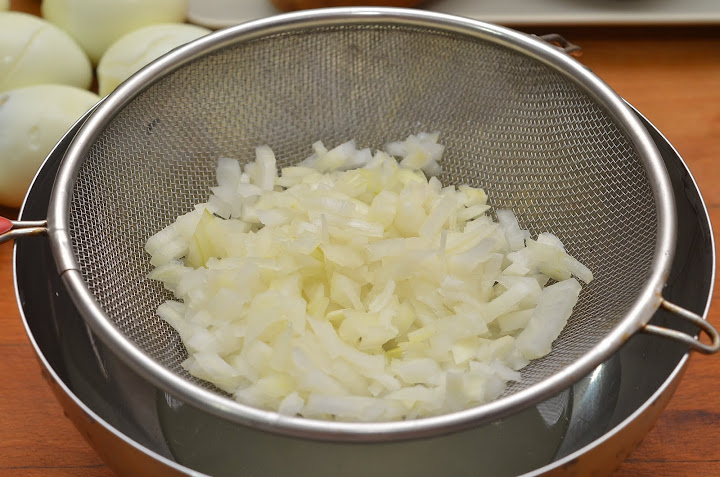 5. Peel and clean the eggs then dice them. If you like you can use an egg slicer, it is much easier and faster. 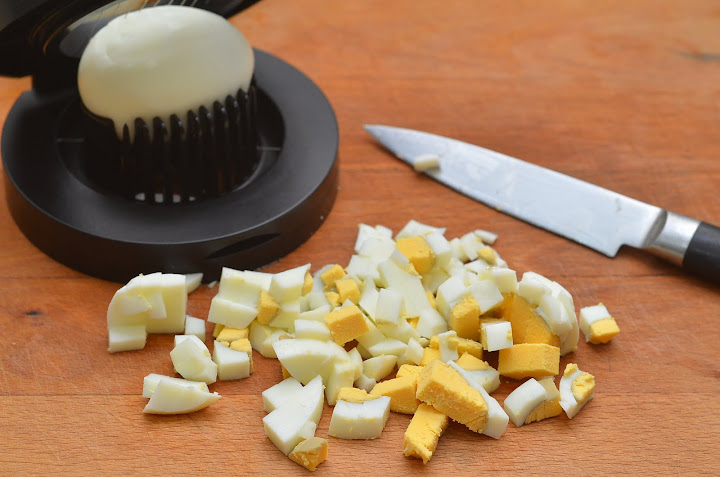 6. Cut the potatoes into cubes. It is important that they are not mushy. 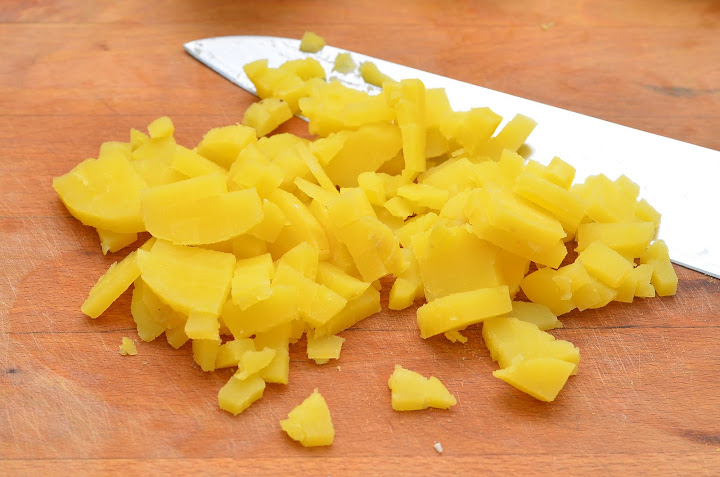 7. Clean and peel the apples. 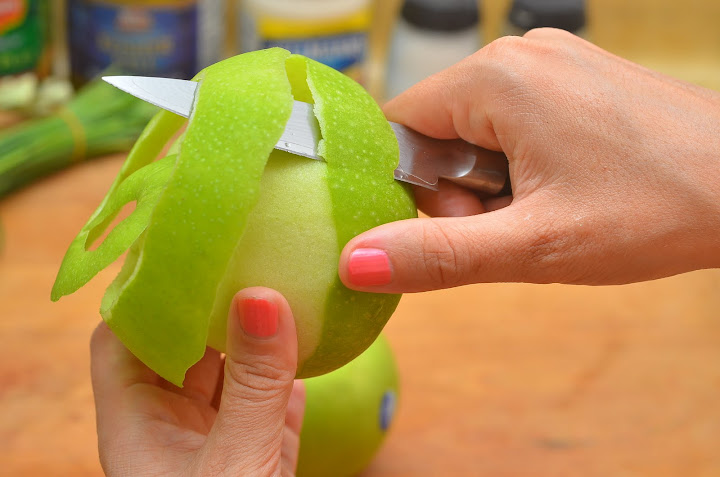 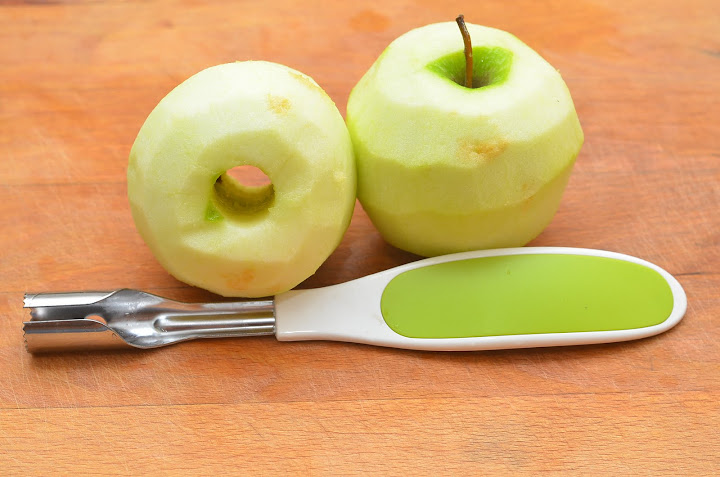 9. Dice the apples. The apples are optional but I really love the sweet flavour they give the salad. The combination of sweet and savory flavours is fantastic in this dish. 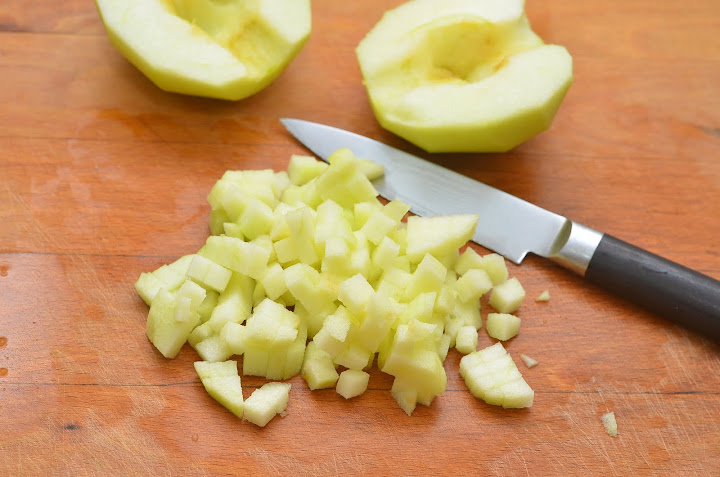 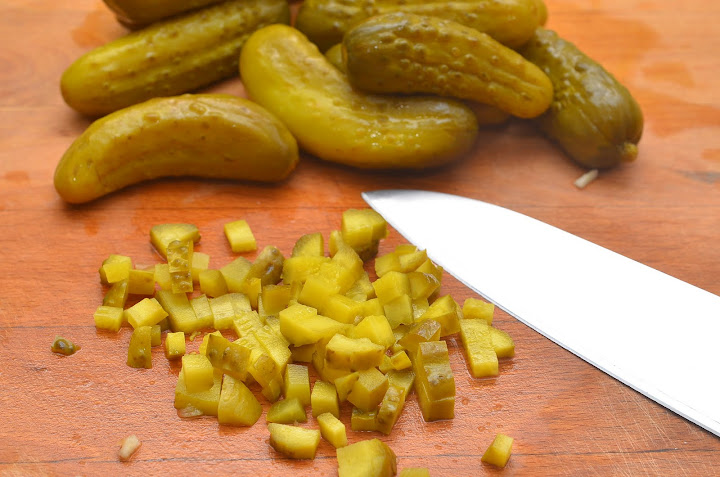 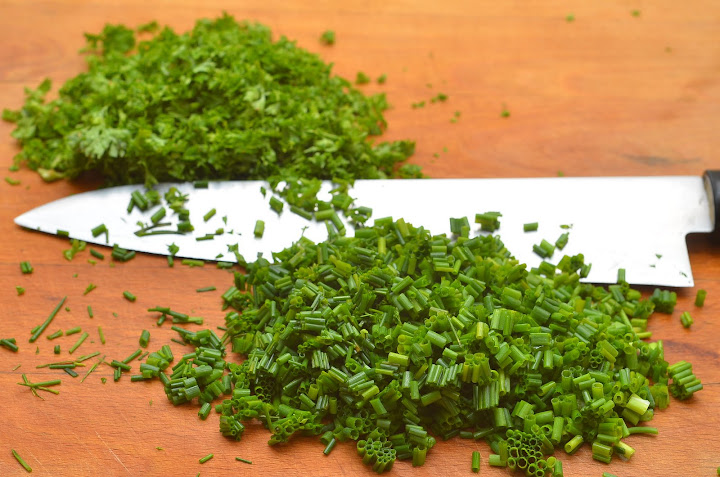 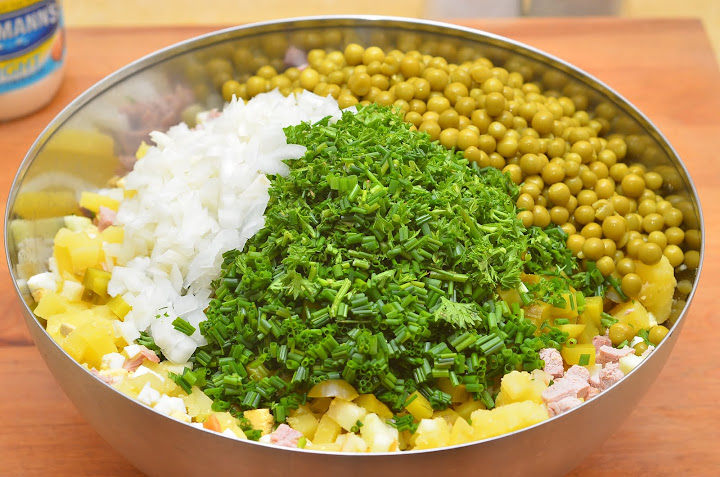 13. Stir very carefully, be careful not to break or crush the cubes. Season with salt and pepper, stir again. 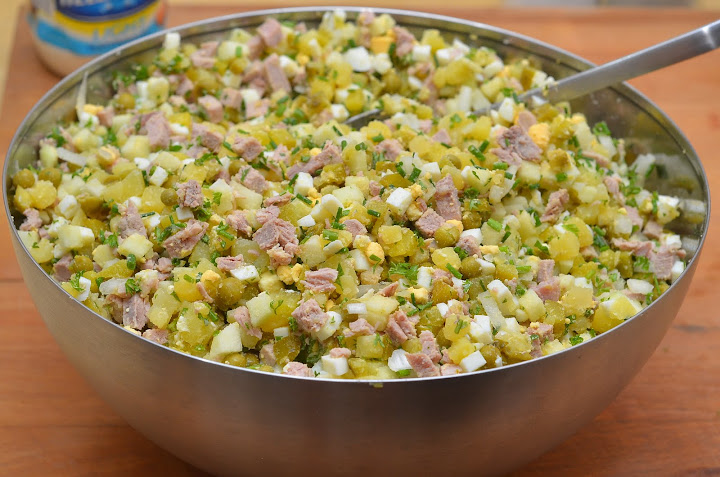 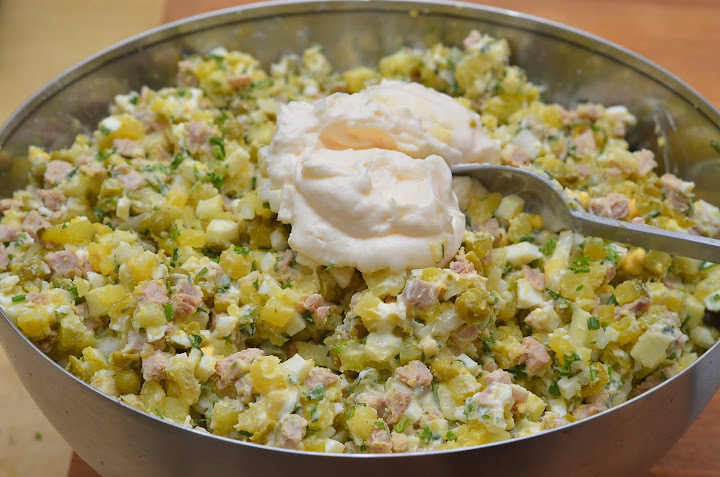 15. Voila! This hearty and delicious salad is ready. 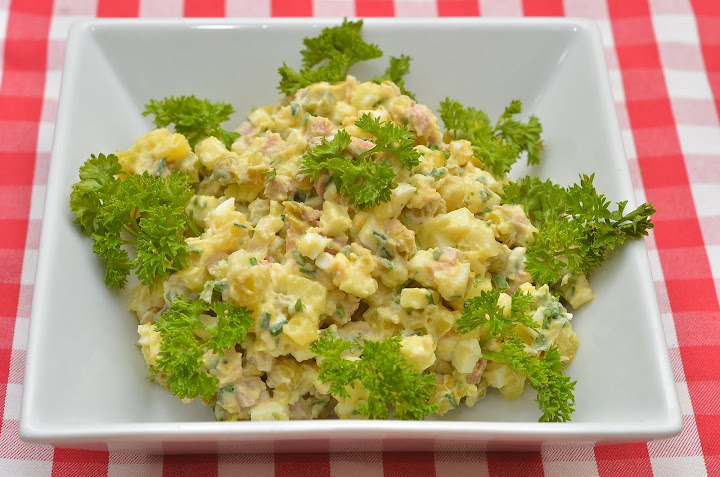